That doesn’t mean it’s OK to get complacent about possible aftershocks. The whiplash moves aren’t necessarily over, with volatility still elevated. The Cboe Volatility Index (VIX) did fall below 20 this morning, but VIX is still way above last month’s lows of under 12.

China’s currency is another potential source of worry. Beijing set the yuan a bit higher versus the dollar today, so maybe that’s an olive branch amid all this tough talk. We’ll see.

European and Asian markets mostly climbed earlier Thursday, crude gained ground from Wednesday’s eight-month low, and the 10-year U.S. Treasury yield is back above 1.72% after slipping under 1.6% briefly yesterday for the first time since 2016.

It’s the relentless slide in yields around the world that appears to have markets on edge amid worries about the global economic outlook as China and the U.S. continue to spar. We’ll see if the higher yields this morning provide any relief for the Financial sector, which came under heavy pressure yesterday as yields sank.

Anyone who feels confused about the markets after Wednesday’s sharp reversal in stocks can be forgiven. It was a difficult day to get a read on things; no two ways about it. One lesson for long-term investors could be to try not to get diverted by all this daily noise and stick to the things that matter in the long term, particularly earnings reports. Watching every tick these days can be pretty stressful, and you don’t want to make any moves based on fear.

For short-term traders, the lesson might be to consider keeping things small. If anyone did something big yesterday, they probably had trouble sticking with it, because the market was like the Chicago weather: At one point or another, everyone was likely to be right.

A 600-point slide in the Dow Jones Industrial Average ($DJI) early Wednesday made it look like it might be one of those days. However, after failing to take out Monday’s lows, the market made a quick reversal that accelerated throughout the day and might turn out to be supportive going forward from a technical perspective.

The reversal partly could reflect failure to make new lows, but also could have been the result of yields starting to stabilize and the fact that a lot of cash remains on the sidelines apparently ready to go back into stocks if the price looks right. Materials, Staples, and Real Estate ended up with strong gains, but the flattening yield curve helped keep Financials on the defensive.

It’s tempting to say a turnaround like Wednesday’s means danger was averted, but it’s not necessarily healthy if technical strength now in the market sends stock indices straight up from here. If that happens, it could lead to selling that might take the S&P 500 (SPX) back to revisit the week’s low just under 2825 one more time. The SPX has tested that level twice this week and popped back both times.

There does seem to be some natural inclination to buy these dips, and maybe it goes back to the situation with China. Instead of what investors used to call a “Fed put”—meaning the Fed would lower rates if stocks fell too low—what might be out there now is a “China put.” According to this school of thought, chances for a trade deal with China might take the starch out of bears when markets start to fall. As long as the tariff situation is in doubt, it looks like people don’t want to sell too aggressively.

However, many see the central bank situation as a continued bearish overhang, with interest rates negative in many countries as people in charge of monetary policy try to avoid recessions and keep their currencies lower to encourage exports.

Speaking of exports, China’s rose 3.3% in July. Analysts had expected them to drop. This sign of unexpected strength in China’s slowing economy appeared to cheer people up, too, Thursday morning.

Feeling Jumpy? So is the Bond Market

The whole bond yield curve went crazy on Wednesday, and this isn’t typically the kind of thing you see just end in a day or two. It was an amazing day when you get right down to it, and the fact that volatility never really popped on the way down early Wednesday might have been a sign that things were due for a reversal. The Cboe Volatility Index (VIX) actually ended the day below 20 for the first time since Monday. Typically, levels of 20 or above in the VIX signal trouble ahead for stocks.

If you didn’t pay close attention, you might have missed the brief move below 1.6% for the 10-year yield during Wednesday’s session. It was the first time under that level since 2016 as yields around the world got squeezed amid central bank easing. Thailand, New Zealand, and India all cut rates Wednesday, which probably helped set off the early selling in stocks as many investors adopted a “risk-off” attitude. However, the 10-year yield did bounce back to just under 1.7% by the end of the day Wednesday.

One lesson for investors here is to consider being skeptical about the “hot move.” Right now, the popular thing is to buy bonds, but it’s nerve-wracking to see the whole world pile into one trade, and history shows it usually ends poorly.

Anyone hoping for additional rate cuts here in the U.S. probably liked what they heard from Chicago Fed President Charles Evans on Wednesday, who said the Fed would need to provide more stimulus than it did last week if growing trade tensions lead to a sharper pullback in the U.S. economy, The Wall Street Journal reported.

Encouraging Words from BA, While Q3 GDP Estimates Anything But

In the search for positive news, the spotlight landed on Boeing (BA) Wednesday as its CEO said he continues to see the 737 MAX heading back to service in Q4. He added that there’s still some risk to that timeline. Some analysts believe BA’s problems helped slice a bit of growth from Q2 gross domestic product (GDP), simply because BA has such a broad impact on many other companies from airlines to engine makers. Even with that development, BA finished slightly lower Wednesday.

Speaking of GDP, estimates don’t look too hot for any improvement in Q3 from the government’s estimate of 2.1% growth in Q2. The latest Q3 growth prediction from the Atlanta Fed’s GDPNow is 1.9%, down from its previous 2.2%. An update to the GDPNow estimate is due this morning, so it might be worth a look to see if the recent rate worries played into its new projection.

The New York Fed’s NowCast is even lower with a 1.6% estimate for Q3 GDP. You have to go back to Q2 of 2016 for such an anemic quarterly GDP number.

On the trade front, a Chinese official said Wednesday that he still expects China to participate in trade talks next month despite the recent growth in tensions. This news from the South China Morning Post was probably one of the things behind the market’s recovery from sharp losses right after the open on Wednesday. 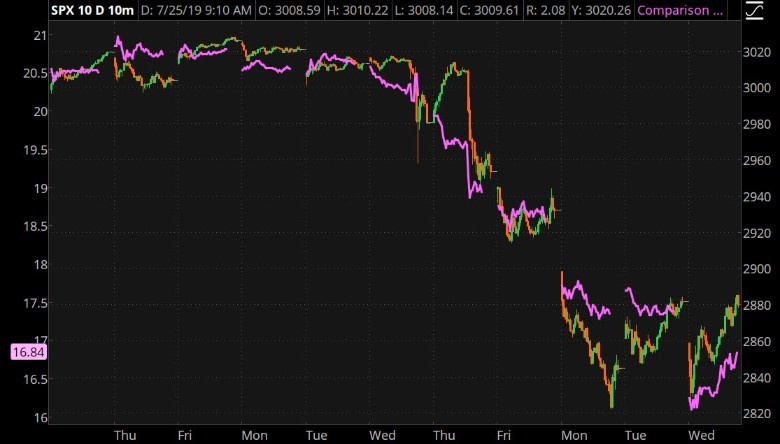 Material World Shines: With trade tensions growing by the day, you might think the Materials sector would come under pressure. After all, Materials companies engaged in mining, metals, and forestry provide the foundations for many of the economy’s products, and are heavily exposed to any fallout from trade wars when the flow of goods slows. However, on Wednesday, Materials was one of the leading S&P 500 sectors, and it appears related to one particular material: Gold.

As gold prices climbed above $1,500 an ounce for the first time in more than six years this week, gold mining companies (which are included in the Materials sector) are having not just a good week, but a good 12 months. One tracker—the S&P Commodity Producers Gold Index—shows a group of gold-related stocks up nearly 40% year-over-year. That said, the last 12 months were a real exception for those stocks longer-term. If you go back three years, the index is still negative. No one can accurately predict where gold might go from here, but it does look like many investors who are cautious about global growth have been directing money into this arena. Stay tuned.

Data Break Ahead: Data hasn’t really been the focus so far this week. That could change Friday morning when the government reports Producer Prices (PPI) for July. The most recent inflation reading was a 1.6% year-over-year rise in core Personal Consumption Expenditure (PCE) prices, a number analysts say the Fed follows closely. That didn’t raise too many eyebrows at the time, though PCE price growth has accelerated slightly over recent months. PPI is an interesting one because it shows if producers are facing higher costs that might eventually get passed along to the consumer. Analysts expect both headline and core PPI to rise just 0.2% in July, according to Briefing.com. Core PPI was up 2.3% in June year-over-year, so we’ll see if that got any stronger in July.

Race to the Bottom? In the runup to last week’s cut in the Fed funds rate, some critics had complained that the Fed acted a bit too slowly. Yesterday we may have gotten a glimpse of the other side of the coin—competitive devaluation. That’s when nations engage in a sort of tit-for-tat rate-cutting cycle in hopes of getting (or keeping) an upper hand in the importing and exporting of goods and services. If your economy relies on exporting into the U.S. and other developed markets, and the U.S. just cut its rate, what choice do you have but to be even more aggressive than the U.S. and cut your own?

Monday’s move by China’s central bank to weaken the yuan versus the dollar sent global markets reeling. Yesterday morning, several other nations, including India, New Zealand and Thailand, cut their benchmark rates. This helped send U.S. Treasury yields down across the board. Futures markets have now priced in between one and three more cuts to the Fed funds rate between now and the end of the year. With much of the developed world watching yields drift further into negative territory, many investors are likely wondering where it all might end.

Processing...
Thank you! Your subscription has been confirmed. You'll hear from us soon.